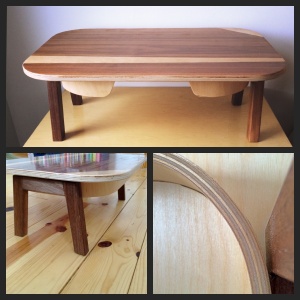 Whenever I make something, I always try to incorporate some new skill so that I can learn while creating.  This time I went a little over board.  My daughter was in need of a lap desk to replace the dollar store plastic one that had an untimely death when she used it for steeple chase practice in the living room…  My father made my brother and I two such desks when we were kids, except that he simply used three pieces of plywood and some piano hinges (in hindsight, not a bad idea to be honest…).  I decided I was going to go much more upscale!

My mid century modern inspired lap desk started out as a way to practice bending plywood.  I made the apron of it from several layers of 1/8″ baltic birch plywood that I bent around a form.  Then I attached it to the top which I decided to veneer with some walnut I had lying around.  I was using the white glue and iron technique which unfortunately led to a few large cracks.  This meant I needed to do some inlay to cover up these cracks.  The legs were made using angled bridle joints, and finally the top was coated with an epoxy finish.  Did I mention I had never done any of these skills before?

The final piece is not something I am truly proud of, there are many “first time” mistakes which I have learnt from and will be better able to handle next time.  It’s only failing if you aren’t learning after all right?  I do like the design, and some of the techniques I’ll try again (bridal joints), and some I won’t use (vacuum press veneering would lead to a much better finish).  There should be more furniture pieces showing up on the blog throughout the spring, so stay tuned!