Last Sunday was Worldwide Pinhole Photography Day.  In the past I’ve made a camera for the occasion but due to time constraints and laziness I opted for a pinhole body cap on my digital camera.  I love how the light flares in the picture, and it also shows how dirty my sensor is!

More info on World Pinhole day and photos from around the world HERE  Click on Gallery at the top of the page for photos. 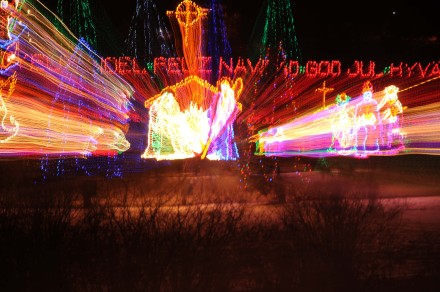 You know you don’t use a digital camera very much when it takes you half an hour to figure out where you last put it… And then another 10 minutes to find the cable to download the pictures…  On that note, as soon as I get the AF issue fixed with my D300, it’s going up for sale.  Too much camera to be sitting in the closet (yes that’s where I eventually found it…).

Anyways, this week’s photo was taken on Christmas eve.  I took a long exposure of some Christmas lights while zooming the lens.  I took about 20 shots, and this one looked the best overall.  I got the technique a bit better on a few of the other shots, but as I didn’t bring a tripod along, some of the shots didn’t turn out so well.  Taken on my Nikon D300 with the 18-70 zoom lens (used the entire zoom).  Exposure time was in the 2-3 second range, supported on a fencepost.

While most of my photos have been from film cameras or the odd one from my D300, I do own a digital point and shoot and feel it’s a great camera for certain situations.  The other day I was making an espresso when I saw this shot and felt the need to take it.  It’s a simple still life and even though it’s taken with a cheap camera, I like the look of the shot due to the slightly different perspective.

To start off, for those of you looking for a comparison between the two, you’ve come to the wrong place as I only own one of these fine cameras… The following are merely some musings of mine regarding my photographic future so to speak…

I love taking pictures, but I don’t love lugging around heavy cameras.  My most used camera is an Agfa Optima because it’s tiny, and doesn’t weigh much.  I mean it helps that it takes great pictures, but it certainly isn’t the only criteria.  While I do love film cameras, I still have a digital slr that honestly takes wonderful pictures.  Where it fails me is in the weight department.  I often get great pictures with my Agfa not because it has some wonderful secret touch to it, but because it’s always in my shoulder bag or in my pocket, ready to be whipped out and used, whereas the Nikon is usually sitting on the shelf collecting dust with a big honking lens attached.  When I do take the Nikon D300 with me, I thoroughly enjoy using it, it’s auto focus (of which none of my film cameras are), and the immediate feedback is a refreshing change.  The problem is it gets used very, very rarely these days.

This has got me thinking whether I should switch to a smaller system?  I’ve always liked the size and design of the Panasonic GF1, it’s very rangefinder-esque and with the small pancake lens would certainly be very portable.  I realize it’s got a smaller size sensor which isn’t going to be able to touch the quality of the D300, but I so rarely blow up my digital photos, maybe it just doesn’t matter?  I could easily pay for the GF1 by selling my Nikon kit (and have a fair bit of cash to spare), but then I also worry wether this would then replace my Voigtlander rangefinder?  I’d have two cameras with similar focal lengths, similar sizes, but one has auto focus, auto exposure, instant feedback, whereas the other has none of these things…

With the recent GF2 announcement, I suspect the GF1 will drop in price before it is sold out, so maybe a deal could be had and I could keep both, cause I really need more cameras at this point…

Creative Pro is an awesome website for Graphic Design Software, tutorials, reviews, etc.  I stumbled upon it a year ago and it’s a great site to visit when you’ve got some spare time and feel like playing with Adobe CS(2,3,4,5…).  I generally stay away from the “news” and “reviews” as I don’t have the funds to buy more software so I need to stay happy with what I’ve got.  The “features” and especially the “how to’s” are a great resource to have around.

The how to’s are directed at all of the Adobe Design Suite, as well as a few other graphic design softwares.  They are easy to follow and very helpful.  I find that only about half of them ever interest me, but there are several pages worth of them that you can scroll through so you are bound to find something useful.  I like to go to the site when I’ve got a bit of time so I can actually follow along with the how-to, if not I find I rarely remember how to do it…  While it covers the whole Design Suite, I mainly stick to the tutorials on InDesign and Photoshop.

Let me start off by saying if you are looking for an in-depth, hard hitting review of either of these devices, you’re not going to find it here. The following are merely some musings of mine as to the usefulness of both of these devices as it pertains to me. You being a reader of this blog likely share some similar needs/wants so may find this useful.

So, on with the show! Let me just say that I am not an Apple fan boy, I am a recent convert to Apple with an iMac purchase a couple of years ago.  I bought it as I was frustrated with my old desktop (a PC, but it was frustrating due to it’s age, not it’s OS).  While I’m not overly pro either, I do prefer Macs now that I’m used to them, however I do find them a little hard to find my way around as I’ve grown up on PC’s.  I really like the design of Apple products, and the way my computers are used, they are a piece of the room, so design to me is important.

With our upcoming trip to Paris, I needed something to bring with us so we could email home, update our blogs, edit digital photos, skype home, and create books.  We already have an iMac, but this isn’t very portable.

When the iPad was first announced, I was intrigued, but was it a must have? No, I thought I could do without it.  I am a gadget guy. I love my gadgets, and I often NEED the latest gadget (or so I convince myself).  The iPad seemed cool, but it didn’t really blow my mind.  But as it got closer to launch date, and more reviews became available, I was getting swayed.  Then I watched ALL the apple videos on what the iPad could do.  I was hooked. It seemed so useful, no INDISPENSABLE!

Looks like I could do the books with iWork, and skype would work but not with video, editing photos would not work, but updating blogs/email would be a cinch.  The big deal is that we could read magazines (our favourite pass-time) and we wouldn’t waste all that paper.  The iPad also seems like a device that is only going to become more useful as more and more apps are developed for it.  The last thing I thought was upon our return, it would still be useful to have and to use curled up on the couch or in a coffee shop.

Then we have the macbook pro. Why not the macbook? Well I think the pro looks cooler.  This can do absolutely everything we need and more. Not only could it run iWork, but it would be more than capable of running CS3 (preferred by me).  It also has a bigger screen, a keyboard included, and much more storage.  So where’s the trouble? Sounds like the macbook pro is perfect?  Well except that it costs more than double, and upon our return in the fall we don’t really need a laptop.  I guess you could argue that whatever we do with an iPad we could also do with this laptop, but it seems a bit wasteful to me.

After much deliberation, I decided that editing photos was a must so we went with the macbook pro purchase.  I think the laptop could be useful in our future business ventures in design, and will likely find a place in our studio in the fall.  While I still think the iPad is a great idea, I think version 2 will likely be even more impressive. Hopefully a forward facing camera to enable video chat is included.

While on my favourite Camera Forum I came across a post about a guy in Japan who had taken an old Zorki FSU Rangefinder (basically an old Leica II copy) and had turned it into a digital camera!  He did this by gutting it and filling it with a Sony digital point and shoot.  Quite the operation, but some excellent results!  The translations don’t really work (although some are hilarious to read), but what a great project.  Link

I’ve always wanted a digital rangefinder, something like my Bessa R, but digital would be a great fit.   I’ve been very tempted lately by an M4/3 camera, especially with their compatibility with just about any lens ever created, but it’s hard to justify the expense right now.

I have a feeling that this will be a project I’ll try to replicate this fall, but what camera to use?  I feel that I’d want to use one with as few buttons as possible, this would reduce the number of holes I’d need to cut.  Ideally it would have the same lens barrel diameter as an old M39 format rangefinder, if not it would be difficult to cut the lens hole.

Some people may say why would you do this?  It’s no more functional than the original camera, but what great style it has!